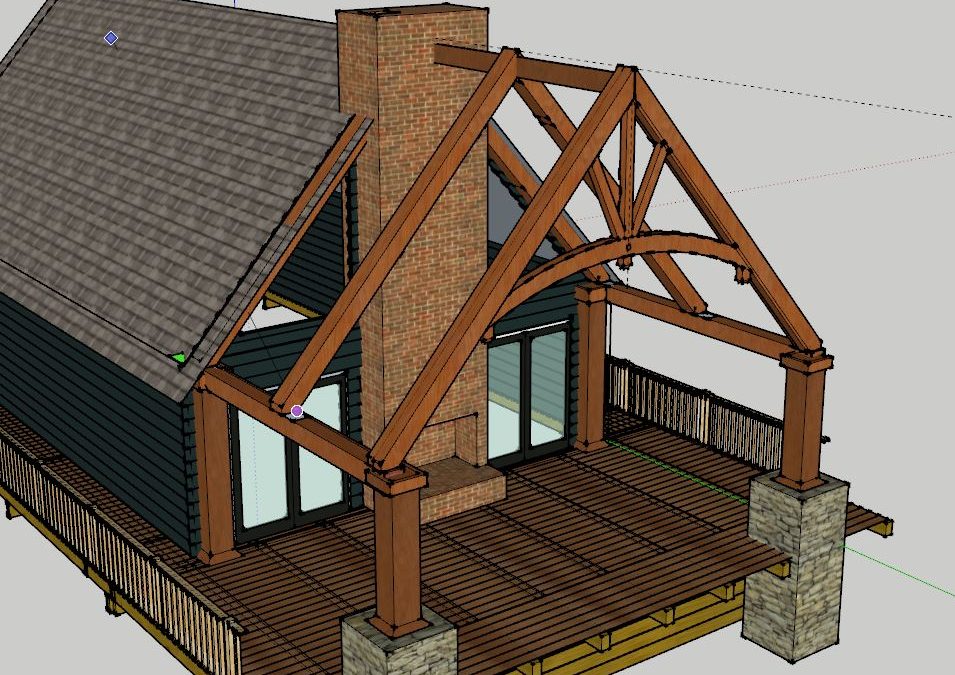 I love questions of the week I’m going to help James answer a question he sent me from Georgia.

How do I join the ridge beam into an existing structure where there’s a brick chimney stack?

Looking up the picture that you sent me, it’s a little trickier than I thought. First, I have a question for you, James. Did you get an engineer involved? The beam doesn’t look like it has a lot of support on the chimney end. The ridgeline is usually resting where the piers are; from the center beam. So, it looks like it aesthetically will go into the chimney section.

And by the way, even though there’s not a whole lot of weight, you’ll want to add some type of Simpson Bracket, maybe an inverted bracket, where the screws are inside and you don’t have this big metal flange hanging out. Drill that into the bricks. You’d have to drill holes with a mortar bit, and then countersink some type of bolts in there. Make sure to use bolts that are meant for masonry. Inverted Simpson brackets, though they’re not carrying a lot of weight, are for aesthetics.

That will give you some stability because your main load is way out on the piers.

I would encourage you, in this case, the diagram looks right, it doesn’t look like there’s a whole lot of weight bearing on that beam going into the chimney. You’ll want to verify that with an engineer. You don’t want to have a structural problem down the road.

Besides that, it looks beautiful. You’re doing a great job. It’s funny when the footing is poured for the chimney foundation it doesn’t have to be perfectly square or even, the footing is whatever is left over in the cement truck. That’s where they do their clean out. Everything goes into that big lump of concrete.

Then the chimney is actually built on top of that. So chances are you have a massive foundation. It’ll hold the weight of the ridgeline. But again, you should have a Simpson bracket there to connect the two.

Get an engineer to make sure you’re doing it right.

If you have a question for me, send it to askthecontractors.com. I want to answer your question. If I can’t answer it, I’m going to go to my website. I’m going to find one of Trusted Pros and I’m going to have him on with me to talk about your remedy.

Ask me your home renovation and home remodeling question from the link on the home-page at AskTheContractors.com

We answer your questions right here on the show

You can find qualified contractors for this project / and others in the Directory at AskTheContractors.com.  Request a bid from our Trusted Home Improvement Pros.

Recent Questions of the Week

This message is only visible to admins.
Problem displaying Facebook posts. Backup cache in use.
Click to show error

Error: Error validating access token: The session has been invalidated because the user changed their password or Facebook has changed the session for security reasons. Type: OAuthException

Back in the Saddle; Talking Big Brothers & Big Sisters

More than Home Improvement, we talk about Life Improvement with Big Brothers and Big Sisters to do good for others.
Link to Facebook
· Share